A Retort is a special ability that may be possessed by Wizards in Master of Magic. There are a total of 18 Retorts available in the game, most of which provide effects that are either difficult, or impossible to duplicate otherwise, and last for the entire duration of a game. Retorts may be chosen before the campaign begins, in which case they reduce the number of Spellbooks that the Wizard may pick for their repertoire. Alternatively, Retorts may be acquired during play, as Treasure for clearing out particularly difficult Encounter Zones.

Wizards in Master of Magic are distinguished from one another in several ways. One of the more influential differences is the existence of a Retort: an innate characteristic that alters the effectiveness of the Wizard in performing some specific actions.

There is a total of 18 available in the game. Most Wizards will start a game of Master of Magic with at least one Retort, though they can also start with none. Each Retort acquired at game-start reduces the number of Spellbooks that Wizard possesses, and thus comes at the expense of the variety of spells available to that Wizard.

Retorts may provide very different bonuses to the Wizard. One Retort increases Mana production, while another increases the Wizard's

Fame. Others influence game-driven events, such as the hiring of Heroes and Mercenaries, while others still affect the behavior of Nodes. A Wizard can have up to 6 Retorts per game.

Retorts may also be acquired after game-start, by collecting them from Encounter Zones such as Ruins and Nodes. They are awarded randomly as some of the most valuable (and rarest) rewards for defeating particularly difficult monsters or armies in Encounter zones. Potentially, a Wizard may collect a very large number of Retorts, though this is limited by the number of type of Spellbooks in his possession.

Retorts are never lost: once a Retort is acquired, the Wizard will keep it until the end of the campaign. The Retort will continue providing its special bonuses throughout this time.

Two or more Wizards may possess the same Retort freely - it is not a unique trait.

A wizard may never have more than 6 Retorts at any given time. This limit is enforced both during custom-wizard creation and during gameplay.

At the start of the game, most Wizards will possess at least one Retort, if not more. The exact number and type of Retorts they have depends on several factors, including whether they are player-controlled, and the current difficulty setting.

If the player chooses one of the default Wizard templates offered by the game when it is started, his/her Wizard will have a specific Retort (or none) depending on the chosen wizard:

Additional Retorts can be picked up during the game (see below).

During the creation process of a customized Wizard, the player may pick individual Retorts for this Wizard from the list of all 18 Retorts.

Each Retort selected will reduce the number of Spellbooks this Wizard may pick for his starting repertoire by a certain amount. Thus, each Retort picked reduces the variety of spells this Wizard will be able to research and cast (barring any additional Spellbooks acquired during the game):

Most of the Retorts on the Retort list will not be available for picking immediately, as they have specific requirements based on the number and types of Spellbooks chosen by the Wizard. Therefore, some Retorts will only become available once the player has chosen the required spellbooks. If the player changes the number or type of spellbooks chosen for the wizard being customized, and Retorts whose prerequisites are no longer fulfilled will become "unselected" and will not be available unless the player readjusts his picks to make them available again.

Additional Retorts can be picked up during the game (see below).

Note that the 6-Retort limit is enforced while creating a new wizard. Therefore, it is only possible to pick up to 6 Retorts. After this, any attempt to add an additional Retort will result in an on-screen error message pop-up informing you that you've reached the limit. Remember that you can always remove a selected Retort by clicking on it - freeing up a Retort slot and one or more picks as appropriate.

When the game begins, computer-controlled Wizards may discard default Retorts and substitute them with new ones. Additionally, like the player, they may acquire Retorts from lairs that have such treasure, as explained in the next section.

If the game's difficulty was set to Intro or Easy, the computer-controlled Wizards will run under their default profile, with their chosen Retort defined in the Default Chart above. On the Normal setting and above they may randomly discard the Retort, unless it is Myrran, and one or more spellbooks in successive die rolls. The likelihood of this increases with the difficulty, as does the number of picks they ultimately take to complete their profile (11 on Normal, 13 on Hard, and 15 on Impossible). Computer players throw new Retorts on semi-randomly; while they ignore all the prerequisites that govern our own initial skill picks, the program seems to make an effort avoiding skills that are completely without basis in the computer player's books.

When playing at the Impossible difficulty setting, enemy Wizards may frequently appear with many odd retorts and a very different-looking set of books from the default portrait. Consider the copy of Sss'ra pictured below. 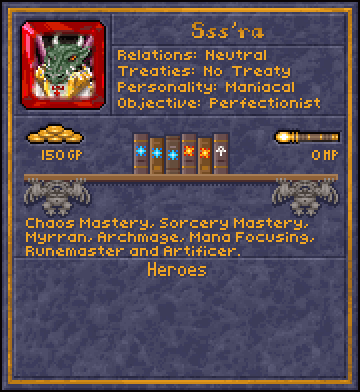 Sss'ra, a Draconian Wizard from Myrror, is forcibly spawned in Hard and Impossible maps if the other wizards fail to roll the Myrran retort. His default build is Myrran

4. In attempting to eliminate default spell ranks and skills, the program successfully discarded

3, and possibly tried and failed to eliminate Myrran. To fill his profile up to 15 picks, a single batch of three Sorcery books were rolled, and no less than six Retorts in succession... surpassing even the player's absolute, endgame limit on Retorts.

When a Wizard-controlled army defeats the monsters guarding an Encounter Zone, the Wizard receives a reward or set of rewards based on the difficulty level of the monsters he defeated.

Defeating the very highest-level encounters may result in the Wizard receiving one to two additional Specials — Spellbooks and/or Retorts for his profile — on top of the ones he already has. This is considered an excellent and very rare reward, encouraging players to try and be the first ones to reach heavily-defended encounters and win them.

The game will randomly pick any valid Retort that the Wizard does not already have, and add it to the Retorts list for that Wizard (visible in the Info->Mirror menu). The new Retort takes effect immediately, and will remain in effect until the end of the game.

A wizard may never have more than 6 Retorts. If a wizard already has 6 (whether from game-start or acquired as rewards) he/she will never again receive a Retort as a reward.

Note: The game's Official Strategy Guide is erroneous on a few minor points about this.

Retorts found in lairs ignore all prerequisites and restrictions. It is thus possible for a wizard to collect advanced skills without meeting their often-stringent requirements, possibly gain a mastery in a realm they have no books for, and even possess both Divine and Infernal Power (though the effects are not cumulative, so there is no benefit to doing so).

Only Myrran will never be awarded, on account of being a 3-pick retort. There is no opportunity lost on this, because the asset has no impact on gameplay after the game has started. "Arcanian" wizards can draw the ongoing

+5 Power bonus from a Myrran fortress if, during the course of the campaign, they Move the Fortress to a city on that plane or cast the Spell of Return there... which is to say, the power bonus is not an inherent property of the Myrran Retort.

Specials are rolled randomly at the very instant a wizard conquers a Lair, and Spellbooks are significantly more likely to appear than Retorts. Expensive retorts are especially hard to find; they will only show up if the game rolls one first when sacking a 2-pick Lair. Base probabilities and odd circumstances are listed in the short table below.

Retrieved from "https://masterofmagic.fandom.com/wiki/Retort?oldid=29352"
Community content is available under CC-BY-SA unless otherwise noted.